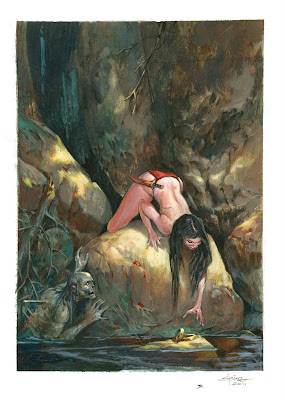 MicroVisions
I was deeply honoured to be asked to do a painting for the MicroVisions expo. Fully conscious of the artists that has contributed in th past, I set out to do something difficult but close to my heart. I was going to do a little story in the picture and thus resisting the temptation to do a barbarian babe portrait ( which is always my first choice in doing an unbound assignment or when I am asked to: “hey can you do a fantasy-art drawing?”)

I wanted to do something evil and creepy but with more mood than core, and finally I decided on something that would allow me to still fit in a barbarian babe. I sketched a loose thumb of a nude girl reaching for jewels hanging out on a branch, maybe placed there in the sun as a bait. In the shadows underneath the rocks and half covered in water hid the zombie, that had placed the jewels. The nude would not only be because I could, but because the soft skin would show her as being more vulnerable and less protected. 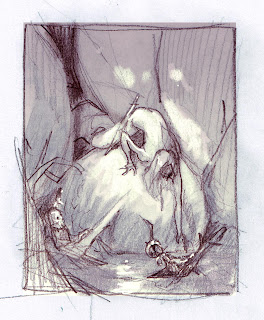 I took it around at the studio and , a comic book artist, pointed out that the lack of involvement or gesture of the zombie might read wrong. It would simply look like there was just a dead guy lying in the water washed up against the rocks. Certainly not as frightening as the sorry I had planed. Also I abandoned the idea of necklace hanging in branches. It didn’t look placed enough. So I switch it out with a flat rock and made the jewels to be bracelets, thick and solid gold. ( the original was going the be very small so I needed something big and visible.

Next I did the real sketch. I placed things more correctly and tried out 2 different colour themes. 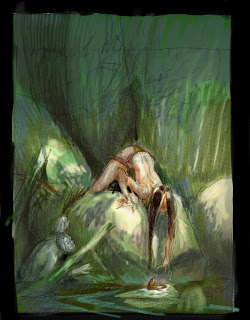 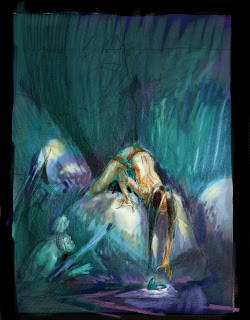 Once again I asked around at the studio and got 50-50 for both versions. Next step was doing some more precise sketches of the 2 figures. The zombie came right out in first try. The eagerness of him was very important. I wanted him to look hopeful, even if it is not a very common thought for zombies, I am guessing. 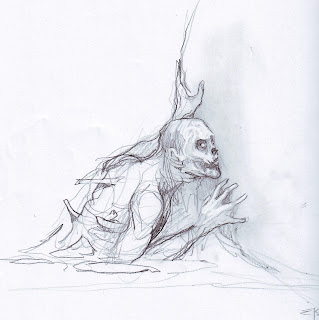 The female sketch was okay, but I was already anxious to get the face right. I asked on Facebook if anyone in the area wanted to pose in bikini for a zombie painting. Apart from a couple of guys volunteering I got one really good contact. Sabina came around the studio the day after and posed in a ring mail bikini I just happened to have lying around my work area. The photos proved to be both a help and a curse. I sketched 2 different versions of the photo but the pose seemed to die or look boring when I went too close to the photo. So in the end I just took some of the photographic elements as the face, hair line in the scalp, butt cheeks and foreshortening in the arm, and placed them within my initial sketch. 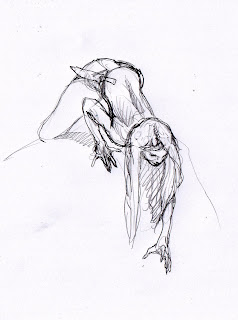 With the 2 figures sketch on separate papers I copy pasted them in to the thumb sketch in Photoshop. I think it is a good think to sketch the different figures separately after the thumb and after you know what and how they are supposed to look and pose. This way you can do sketch after sketch until you get it right, as opposed to doing the whole sketch on one paper. ( yes I did that years ago. Sketches all in one paper in 100% until someone pointed out that it was a waste of time, effort and paper. And I was introduced to Thumb-sketching ). It takes the pressure out if it and lets you aggressively power every single figure for what it is supposed to do. Only when every figure is fully sketched to its potential, I combined them digitally. In this case it is not that difficult, but had this instead been a battle scene of five figures you can see how much benefit it is to separate them. Also It cheats the mind to concentrate on small bites instead of the whole cake. 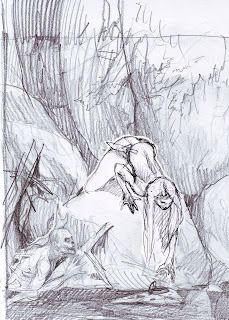 Next step. Ordinary I would transfer the sketch the hard way on to board or paper and thus drawing it a third or forth time. This time I tried a little trick taught to me by the honourable and talented Steve Prescott. My fellow fantasy artist friend and acrylic painter. He prints out the sketch onto paper. Sealing it down and closing the surface with matt medium. Well; I did not have a printer, so I used a copy machine to get it down to the . Problem is, when you do that with thick paper you can rub off the black and grey, so I let it go through another rtime into the machine for it to be warmed up again. The warm hardens the powder from the machine. You can also bake the paper for a couple of minutes to harden the powder. It is a trick we all used here at the studio years ago before everyone went digital and we used to joke around saying “Oh I just need to bake this illustration and it is done.” I did not use matt medium. I like the paint to soak into the paper.

Lastly I found the Wyeth painting that originally inspired me to this painting. I looked hard at it for 2 minutes and then removed it to avoid copying. 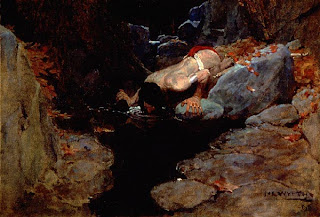 The final painting is really nice. And I was proud to deliver it to Dan and Irene.
Lastly, you can buy this painting on ebay today if you place a bid on the auction.