The Four Reasons You (and I) Don't Get Shit Done


If you were friends with me on Facebook, where I post about last-hour whatthehelldoiwritethisweek issues, you'd not be surprised to know I am sitting down to write my Muddy Colors column at 11pm the nite it's due. I've been thinking about it all week...in fact I've been shuffling through ideas and half-writing this post in my head for days. It would be a hell of a lot easier if I started actually writing it earlier, but like many (if not most) of you, nothing but a deadline will get me to put pen (or paintbrush) to paper. I find it infinitely fascinating (and frustrating) that as a creative, our highest goal is making, but a great deal of time and energy is spent putting it off and stressing and waiting until the last possible moment.
That's right, I'm talking about Procrastination. Although it's not only about procrastination. It's a larger issue. The question is: Why Don't We Get the Things Done That We Want to Do Most? 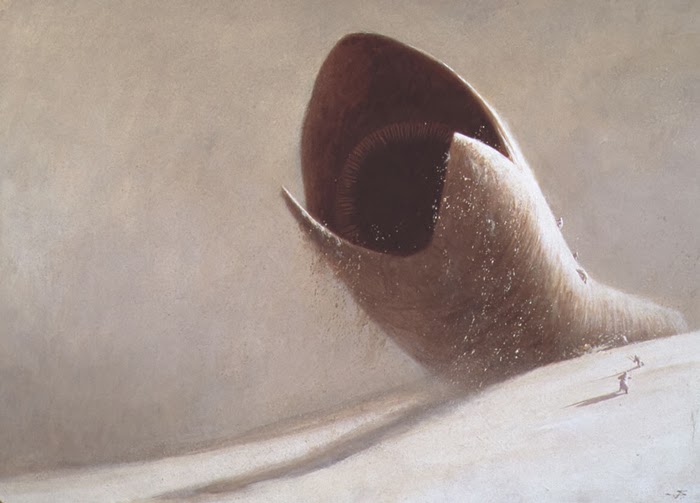 And I'm going to illustrate all my points with Dune quotes and clips. Because I just started a Dune reread, and I don't care how cheesy the movie was, its awesome. And if you can't illustrate a post with Dune clips on Muddy Colors, then where the heck can you do it?


"A process cannot be understood by stopping it. Understanding must move with the flow
of the process, must join it and flow with it." —First Law of the Mentat
My life is a crazy juggling act (whose isn't, right?). At Orbit I'm working on at least 50 books at any given time, plus overseeing Yen Press, writing Muddy Colors posts, doing cons and portfolio reviews, teaching, helping friends with design work, working on personal projects...and that's leaving out any personal and family obligations. I spent 2013 barely holding on by my fingernails, and often paralyzed by the pesky demon Procrastination. I was mad at myself for always stressing out by leaving things to the last minute, not making the most of my time, and doing little more than bouncing from deadline to deadline all year.
I made a promise to myself that 2014 was going to be different. I started reading up on the psychology of productivity, and procrastination, and this is what I've learned, boiled down to the essence. And ways I've tried to work around, or defuse, the issue:
The Four Reasons We Don't Get Shit Done:
1—We're scared.

I know this might sound ridiculous, after having hundreds of book covers under my belt, but literally every time I start a new cover, there's a voice inside that says "What if it doesn't work this time? What if this is the time you're out of ideas?" It's not exactly Imposter Syndrome, but it's in the same family. It makes it incredibly hard to get started, it makes our brains scamper over to the pile of mail you have to go thru, or the laundry, or the clutter you just have to organize before you get down to work.

"I must not fear. Fear is the mind-killer. Fear is the little-death that brings total obliteration. I will face my fear. I will permit it to pass over me and through me. And when it has gone past I will turn the inner eye to see its path. Where the fear has gone there will be nothing. Only I will remain."
—Bene Gesserit Litany Against Fear
2—We're Not In The Mood
You know that amazing feeling when creativity is sparking, and art, words, whatever your medium, is literally flowing out of you? When you're in the zone, and you pick your head up and realize you've been working steadily for 6 hours and only stopped because you had to pee so badly? I want to do all my work in that magic "zone", and I'll wait around and put off work until I'm feeling perfectly inspired. The problem is humans have revisionist memory, and we forget that most times when we did get into the zone, it's not because we felt inspired, it's because we just started, and then fell into the zone. This unfortunately usually happens as deadlines loom, because we are out of options, we MUST start. Then we do fall into the zone, and everything feels wonderful, and we immediately forget that we didn't start off feeling that way, we are too busy basking in the glow of creative output.


"Mood? What has mood to do with it? You fight when the necessity arises — no matter the mood! Mood's a thing for cattle or making love or playing the baliset. It's not for fighting."
—Gurney Halleck

3—We Have to Do Something That Sucks
Sometimes it's not about us psyching ourselves out...sometimes the thing we have to do really does legitimately suck, or is boring, or tedious, or all of the above. That's a pretty straightforward one, and in my experience, the least problematic. Sure, we're all lazy sometimes. And then you pick yourself up off the couch and get it done.


"Without change something sleeps inside us, and seldom awakens. The sleeper must awaken."
—Duke Leto Atreides


4—Other Shit Keeps Getting In The Way

This is a big problem for me. As an Art Director, I live atop a jenga tower of shifting priorities, and at any moment an editor with an emergency can pull a block out and the whole precarious tower comes falling down into a disordered mess. For example, I tried to write this article 4 times today, and each time someone interrupted with something more critical, more time-sensitive, and this became the lesser priority...until suddenly it's 11pm and it's just me and a 2am deadline.

All the advice I can give for this case is to adopt a solid to-do list system/workflow organization. The gold standard is Getting Things Done, but my personal fave (and what currently keeps me sane) is an update on that system called Zen To Done.

Or, you can say it's like a giant sand worm screwing up your whole tidy to-do list, huh? (hey, not all the clips were going to fit perfectly)

"The Sandworm, known to the Fremen tribes as Shai-Hulud, The Old Man of the Desert,
was a force of nature to be reckoned with."
(and yes, this is totally how I feel when I'm flying through my to-do list)

So I found that breaking this down and writing these 4 cases down in my sketchbook did a great deal to help me cut my procrastination short — when I'm stalling I go to that page and just read them, and decide which case is plaguing me at that moment. If it's the kind I can control (#1, 2, 3) then I can remind myself that the biggest thing in my way is usually me and just get on with it. That doesn't work so well for the other-priorities-getting-in-the-way problem, which is what happened tonight. In those cases you just have to roll with the punches, keep revising that to-do list, and stay up till 1am googling Dune clips on youtube.
The other thing I've found helpful is to ritualize my process. In the case of #1 (fear) and #2 (mood), I've found having a warmup routine really does help. In my case, it's often 15min of pinterest, whether the browsing is connected to the project at hand or not. I tell myself, you just have to poke around for 15min, and if you're still not feeling it, you can put it off again. (Luckily that usually doesnt happen—but it does sometimes, and if I'm being honest with myself I just own it. You can't work all the time). So the browsing just gets my brain firing, my creative synapses sparking, and then it just feels easier to step 2, which in my case is to start sketching thumbnails in my sketchbook of all the ideas I want to try. Then I jump to the actual work, and start picking off the thumbnails one by one and crossing them off the list.

The Power of Structured Procrastination (99U)

A great post on procrastination from Greg Manchess's 10 Things series.


And finally, because I can't embed Dune clips without the trippy intro by Princess Irulan:

"The Spice Must Flow!"


And just for the record, I know the movie is a bit silly, and horribly dated, but if you haven't read Dune you really should. It's about 20x deeper than the movie (and no killing people by voice box sonic death rays). I learned more philosophy from Dune than most philosophy books I've read.

Thank you to Travis Lewis for reminding me of this one:

"It is by will alone I set my mind in motion." —Mentat Mantra
(and I agree, Coffee is totally my Sapho Juice)